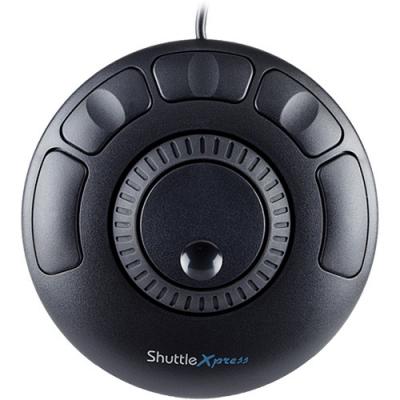 Add frame by frame control to your existing NLE system with the black Shuttle-Xpress NLE Multimedia Controller from Contour. Cross-platform and pre-configured for most NLE editing software applications, the Shuttle-Xpress features 5 fully programmable buttons to customize for your most frequently used editing commands. You can also monitor which program you are in to adjust your programmed commands accordingly.

The jog, located in the center, is alloy and can be turned forward and backward 360 degrees for frame by frame control. The Shuttle ring is rubberized and spring-loaded, which will perform fast forward and rewind in varying speeds depending on how far it is turned.

Use the jog/shuttle knob for frame by frame control of your footage while editing.

Customize the Shuttle-Xpress with presets for your 5 most commonly used editing commands.

Pre-configured for most NLE Software

The ShuttleXpress comes pre-configured for many of the leading Audio and Video applications.

Use the Shuttle-Xpress on either Mac or PC computers.